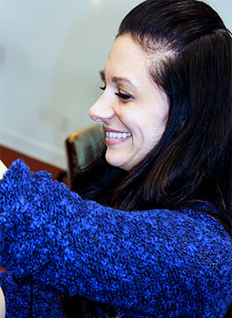 Dominique-Michelle “Niqui” Meyers, Master Colorist, is a 2007 graduate of Empire Beauty School in Philadelphia, PA. Niqui is an American Board of Certified Haircolorists Master Colorist, an elite certification held only by a small percentage of colorists. She began her career in the fashion retail industry in 1998 and began her salon career as a receptionist in 2003.

She trained as a make-up artist under the direction of Suzanne Sauder one year later and worked as a colorist at Gary Charles and Associates after graduating from Beauty School. Niqui has also received advanced training at Rebel Academy. Niqui began working at Taire Hair Salon in May 2010. She specializes in hair color, make-up and waxing, . She also recently received certification in INOA, a L’Oreal Professionnel Color Line.